< Back to Family Stories

“Noah’s Ark were the only ones we could trust to help Alistair” – Raija, Alistair’s mum

Raija and Philip have known Noah’s Ark Children’s Hospice for ten years since Alistair was just two months old. Raija describes the charity as ‘a lifesaver, particularly in those early years when there just wasn’t time to think, let alone do all of the practical things we needed to do”.

Alistair’s mum and dad knew that he was going to be born with a heart condition; what they didn’t know was that he’d have to have a tracheostomy on his first day of life. They also weren’t to know that he’d spend the majority of his first year in hospital with frequent stays thereafter.

That’s why Noah’s Ark was so important in those early days. As Raija says:

“It was just the simple things like getting a blue badge, organising appointments etc. They were things we’d previously been easily able to do on our own, but our hands were so full with Alistair that suddenly that extra help became integral.” 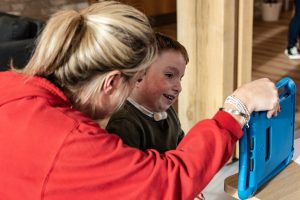 The relationship between the family and Noah’s Ark has changed and grown as the charity has developed. Ten years ago, the charity had no specialist carers, but now the family is so grateful to have a tracheotomy-trained carer within the home. They’ve also had a volunteer, a play specialist, sibling support as well as enjoying the summer balls and various family activity days.

Raija concludes by saying that:

“There are so few people, even family members, who have the skills, competence and technical know-how to look after Alistair. Noah’s Ark has it in spades. And now there’s a whole new place – The Ark – where he can play and be independent in a way that’s just not possible in other community spaces”.